We recently caught up with Mark Manson, a 27-year-old American entrepreneur in Thailand. Like so many members of Generation Y, Mark was unable to find a domestic career opportunity that inspired him. He ultimately decided to take matters into his own hands and launch his own web based business. What Tim Ferriss promised would be a cakewalk turned out to be the most difficult but personally and financially rewarding experience of his life.

We’ll now turn the spotlight over to Mark, who will share with us his experience going from disillusioned graduate to a men’s self development guru.

As recently as five years ago, I never imagined that I’d be spending 10 months a year traveling the world, running my own business and supporting myself on a small collection of websites.

On the contrary, when I graduated from Boston University in 2007, I wanted to get into finance. Like many ambitious 23-year-olds at that age, I had fantasies of fat bonuses, a corner office on Wall Street, and summers in the Hamptons. I was confident. I had always been a quick study, good with numbers and a keen opportunist. I supported myself in college largely on poker winnings and doing odd web design jobs for friends — a hobby I had picked up when I was younger.

And sure enough, some time after graduation, I landed myself a job at a prestigious bank in Boston. Suit and tie, office cubicle, tense competitive atmosphere, the whole bit. It’s everything I wanted and that I had worked for.

And I hated it.

I’ve never handled authority well. I’m a bit of a loner. So the idea of fitting myself into an anonymous corporate scheme, much less ass-kissing my way to the top of some hierarchy, it felt like hell to me. I recognized it on my first day. It was a feeling in my gut, “This isn’t right. This isn’t what I want to be doing.” I lasted six weeks, the only legitimate “real job” I’ve ever held in my life.

But jump back six months prior, back before the cushy, soul-maiming banking gig. When I was finishing up school, one of my little side projects had been being active on a number of message boards and online communities that specialized in men’s dating advice. Over the course of a couple years, I had developed a reputation, particularly in the Boston area, as a guy who knew what he was talking about with the ladies. How a 22-year-old could have any idea what he was talking about when it came women, don’t ask. Just suspend your disbelief for a minute and hang in there.

By 2007, I had developed a bit of a local following of guys who came to me for advice. As such, I had a number of random guys off the internet regularly asking to come hang out with me in bars and night clubs. At first, I ignored these requests and found them to be somewhat creepy. But my roommate, knowing that there was a legitimate industry out there for “dating coaches,” suggested I charge these guys money. So I did. And would you believe it, they paid. A lot of them, too.

So back to the bank and me hating my life. I had my way out. I had about $20k saved up from graduation gifts and poker winnings. I had two weeks of paid vacation. And I was making about $500 a month taking guys out and helping them with the ladies. I knew there was a large and burgeoning market for men’s dating advice online that I could tap into. And I had just learned about the glories and potential of internet marketing by reading The Four-Hour Work Week by Tim Ferriss. Everything fit into place.

I figured between my savings, my meager monthly income, and living frugally, I could sustain myself for at least a year while I built up my new business, which was more than enough time to get on my feet. So it was with confidence that I put in my two weeks notice at the bank. That was June of 2008…

By January of 2009 I was broke. The clients in Boston had dried up. I built a website that nobody visited and wrote a book that nobody read. Working alone sucked. Nobody took my job seriously. Screw you Tim Ferriss.

But I never considered giving up, not for a minute. I loved what I was doing. And I loved how I was living. That and I could see that the potential pay off of financial independence and mobility was worth it, no matter how difficult the struggle was. I moved in with my girlfriend the next month who proceeded to support me for much of 2009. In September we broke up. So at age 25, I moved back in with my mother for the remainder of the year.

I refer to 2009 as my “Pain Period” — 16 hour days, sometimes more, for about a year straight. Crash courses in branding, copywriting, sales, product design, search engine optimization, social media, etc. Everything self-taught. I didn’t have any money to hire help, so all web design, product creation, marketing, promotions, advertising, was done by me.

During this time, I correctly realized two things: 1) I needed to come up with a product or offer that no one else could offer, and 2) I needed to create some sort of recurring income. I eventually did both, and by January of 2010, I was finally making enough to feed and support myself.

So I went to Argentina. High standard of living for about 1/2 the cost. I learned Spanish, enjoyed a new culture and continued to work my ass off. I soon found that by living in places like Argentina, Guatemala, Thailand, Bali, that I could not only save money, but I could live well and enjoy an enriching and exciting cultural environment. That and continue to work my ass off. Did I mention I worked my ass off?

By the end of 2010, I was making a respectable full-time income — the equivalent of what many of my college classmates probably made at their corporate jobs. I flew home from Asia financially stable for the first time in two years. Now, nearing the end of 2011, I probably make more than most of my college classmates, with a lot of continued room for growth. I now own a significant market-share of the dating advice niche, and am beginning projects in other markets which have a lot of potential.

Since going “mobile” two years ago, I’ve been to 34 countries, living in about half a dozen of them for more than a month. I’ve learned Spanish and Russian and plan on pursuing Portuguese next year. I’ve surfed in Costa Rica, kickboxed in Thailand, tangoed in Buenos Aires, raved in Berlin, scuba-dived in Australia, and written a book in St. Petersburg (people bought that one). The more I travel, the more the world seems to open up to me. I can’t imagine going back. The more I explore, the more I want to explore. The more I experience, the less I want to go back to what was.

But there are a few things I think people don’t understand about this lifestyle, particularly those who want to pursue something similar to it.

One is that many people struggle with the decision to leave their desk job or career. They are terrified to “take the plunge.” To me, this wasn’t even a decision. I hated the path that I was on, so I got off. That simple. For me, there was never a question of, “should I, or should I not quit?” It was only a question of, “What should I do instead?” I was never afraid of being broke or being alone. Those things are temporary. Being stuck in a miserable career is not though.

Another misconception is that owning an internet business and working remotely is all peaches and cream. People imagine that you check your email for 20 minutes and then go sit on a beach all day, money somehow magically inserting itself into your bank account. And sure, I sit on more beaches than the average person. But I’m continually amazed at how many people assume that I’m lazy or that I don’t ever work. They didn’t see me staying up 72 hours in a row programming my own video service’s back-end. They didn’t see the two weeks I spent teaching myself how to edit 30 hours of video footage because I had no money to hire someone else to do it. They don’t see the hours, or days on end I spend alone with my laptop, fighting to finish a new project, that may not even make me a dollar and sometimes doesn’t. They assume that since I’m in Bangkok or Barcelona, that it must be vacation and parties 24/7. It’s still life. I still get bored, and tired, and stressed. I get sick and lonely. I just do it in far more interesting locations.

In my opinion, the most useful goal you can achieve is to monetize what you’re passionate about. If you manage to do that, then you’re set… for life. You never run out of fuel. Many people who want to start internet businesses spend a lot of time researching markets or trying to figure out what will make them the most money with the least amount of work. I think that’s a dead-end. Even if it does make you money, you’re going to get sick of it. You won’t want to scale. And it’ll just become yet another trap, just one that travels along with you in your laptop bag instead of in a cubicle. I never contemplated the market potential for men’s dating advice. It was just something that I loved talking about. It also so happened that people thought I was very good at talking about it. The rest is hard work. Insanely hard work. That’s really it. Whether it’s car modifications, or Rugby strategy, or Feng Shui, find whatever you love and bring it to others that love it. That’s the magic. That’s the opportunity.

Mark Manson is an internet entrepreneur, marketer and dating coach. He graduated from Boston University in 2007 and currently lives a mobile lifestyle. In the past three years, he’s developed almost a dozen websites which make money, many of them for his flagship dating brand. You can learn more about him at: markmanson.net. 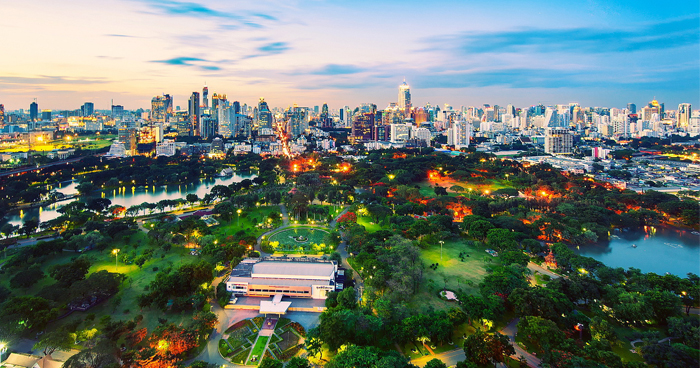 Bootstrapping your Startup in Thailand

Bootstrapping your Startup in Thailand

The Cost of Living in Bangkok

The Cost of Living in Bangkok